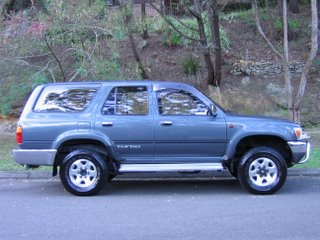 We sold the Toyota Surf (pictured) last week... we had advertised the car on a few online sites but decided to take it off the market as were planning to go on one more camping trip before we sold it... and then out of the blue we got a call as someone wanted to buy it. We had forgotten we had an ad with Carsguide.com.au!
Anyway after a week of toing and froing the car was sold and I was left carless for a week.
We ended up finding a Mazda Astina SP 1990 for a runabout and we're picking it up this Sunday.