I think I've found a new hobby! Painting ceramics. Jackie Devine has been wonderful. She's based in Hornsby which means its a short trip for me and is a wonderful teacher letting me do my own thing. She pours ceramics and cleans it up so that it's ready for me to paint... not that I'm really designing anything as I'm pretty handy with the tracing paper and carbon paper now!
The results of my first two pieces of work: 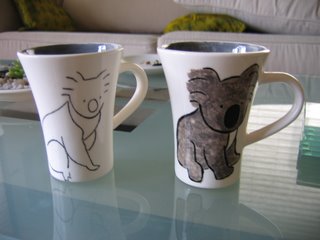 The two pieces above were painted on bisque, which is pre fired so it's not as delicate as greenware. I also did another piece which is for Suzy and Scott to commemorate their wedding... (date to be determined). Here I thought it'd take ages to paint so thought I'd get in early... but lo and behold I managed to paint in one sitting! So now I've painted it and it's been glazed (thanks Jackie!) and fired and sitting here waiting for them to set a date at least. I was going to put the date on it... but being impatient, it's been painted without a date... and I forgot to put my name on it as well! Ah well. Hopefully Suzy and/or Scott don't stumble on this site anytime soon! 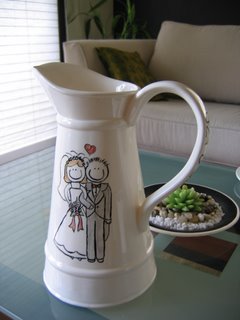 So it's been a while since I've posted... not for any other reason other than I've been busy.
We've continued looking for property going out to Oberon last weekend... http://www.oberonaustralia.com/. The climate is definitely a lot better than other places and they even have a couple of snowfalls per year... which would be nice. But Oberon is a bit further than Howes Valley and it seems to take a fair while to get back via the M4 as the Great Western Highway has all sorts of slow(ish) speed zones and traffic lights! It's ok once you get onto the M4 on the way home... But we've decided we didn't like the town enough, and Oberon itself is still around 30 to 40 mins to Lithgow or Bathurst (the next major towns). We believe it's a growing area so in that way it would have been good, but I think Will and I just like the obscure... so we're still mulling on the Howes Valley property.
This Sunday we met up with an Excavator out of Putty who knows the area and was able to advise us a little on what we can and can't do with the earth moving side of the equation. They advised on building a new dam rather than trying to "improve" or enlarge the supposed "spring fed" dam and also build a new road than try and use the existing track. In any case we're still awaiting a quote from them. Not sure if it'll come though via a fax or via post. I hope it's not post as my card only had the GPO box ... and I just checked it today!
To clear the land they think 2 days may get a fair amount done to both sides of the property... and their costs are $400 floatage each way plus $130 per hour... which I would think is quite reasonable...
I couldn't believe how much sheds cost though! Here I thought they were simple structures, and they cost around $10000 for a decent sized shed... and that I assume is the bottom of the market. We'd probably want to go for something a bit more substantial (with guttering to catch rain water into a rainwater tank) and partially lockable (so we can leave some of our camping gear there)... and prob colourbond... just because it's pretty!
I do hope this doesn't become a money pit. The petrol costs in travelling there every couple of weekends will add up too! Although we then have an excuse to have no social life? ;)
Posted by Yvonne at Monday, March 13, 2006 No comments: