By Yvonne January 26, 2017
I've been a fan of square foot gardening for years.  Our first one was in Kellyville Ridge where we had one bed with the squares.  The concept just makes sense.  Break down the spacing based on a 1 square foot square.  In metric terms that's a 30 cm (ish!) square.

This time I bought some garden beds from Bunnings and just used them.  We have finally landed on a design we like incorporating our chicken coop and the 4 garden beds.

This is what we ended up with in the front yard. 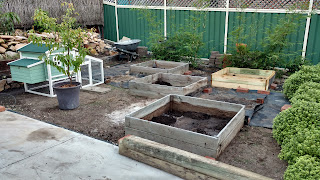 One of the garden beds has been in storage so looks very new!  Over time it will age.  Each square is just a tad under 1.2m.  It's actually about 1.140m on the inside.  So each square will be around 28.5cm.

I just bought the equivalent of Mel's mix.  It's expensive!  But worth it as we have tried the mix before and it does work well.

The mix is 1/3 each of vermiculite, peat moss and a mixed compost.

I bought most of the mix from Enfield Produce because they sold 'bulk' sized vermiculite online.  Other places to look are hydroponic shops.  No one in NSW seems to sell the equivalent of Mel's mix premixed although I did find a WA supplier.

For the 4 beds, ideally I needed 1.452m3 of material.  But I've settled for 1200L of material.  I'll top up the rest with compost.  I don't trust our home grown compost just yet so will just buy it in.

It should give a height of 23cm.  I am hoping it's enough.  The garden beds are 28cm tall and I was aiming to fill it as much as possible but it looks like it will be around 5 cm from the top.

That's a lot of bed space in any case.  It's just the two of us and soon to be some chooks.  I suspect most of it will be growing Chinese veges like bok choy and Chinese Broccoli.  We've decided to ensure there is space for things like corn in the beds!  Radical I know but where we were growing corn we're making that the main compost bay...

This was the corn patch in 2016 along the back there.... that will become the compost heap. 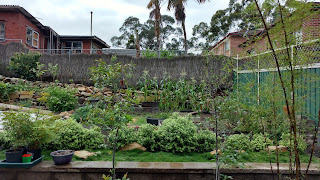 I suspect the mix will go in next weekend due to the public holiday.  Would be nice to see the material delivered tomorrow.... just unlikely!