A night in a tiny house

By Yvonne January 15, 2017
I'm big on tiny houses.  I suspect it's a holdover from when I was a kid and loved cubby houses and dreamt of making a usable space out of things like a car (this was when I was really really small!) or a bus or a railway carriage.  Or a shipping container.

In the last 10 years or so the Tiny House movement has taken off.  And I fell in love with the tiny houses being built by Jay Shaffer and Tumbleweed homes.  Jay has since moved on and started Four Lights Tiny House homes.  I've spent many hours looking at the houses, floor plans and investigating what is required to do something similar in Australia and the rules and regulations for building a tiny house.  But it's been a bit of a dreaming only.

So when I saw there was a crowdfunding campaign for a flat packed tiny house in Australia I was in!


Articles about the home here:

I contributed to the Chuffed campaign so we could spend a weekend in it and also support the cause.  I'm always for trying to contribute to things I believe in and I know if there was an affordable flatpacked solution to get the shell up that would be the bulk of the work to get something towards a tiny home for most people.  At scale this would work but I'm still concerned that the price point is still high.  Perhaps, as Will has suggested, what is needed is the Tesla model.  Where a high end version is demonstrated all kitted out but the 'from' price is the bare bones flat packed version.

So this weekend (13 - 15 January 2016) Will and I packed our bags to live in the prototype tiny house!  I dropped doggies off to dog sitters in the morning and headed out to Leichardt where the Tiny House was situated. The car was just going to be parked there whilst I went to work.  The 'weekend' stay was going to start Friday evening and we'd checkout on Sunday morning.

This is what I saw in the morning: 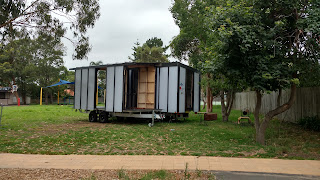 It looked tiny from the street.

In the evening I headed in from work by bus to the tiny house to be greeted by Joanne and Alex.  They were still doing some maintenance of the tiny house, clearing up and making a few adjustments.

There was the equivalent of two tiny houses.  One of them was fully built and kitted out and the other was acting as a verandah and deck area.  The verandah makes a big difference to the feel of the house!

Especially Friday night.  Friday night was the hottest night on record (good choice of night to stay in a non air conditioned tiny house... )  It was 30 degrees overnight.  I'm consoling myself that this is the worst it can get in a tiny house.  I must admit the appeal of a tiny house has diminished since we've moved into our Peakhurst home and my thoughts about moving to the Gold Coast in the future!

We went out to grab a bite on Norton St (pretty much the first restaurant we walked past!) and had a delicious meal of pasta... followed by gelato (of course!)

Our evening was spent sweltering in the heat on a fold out sofa bed in front of a Dyson fan.  The breeze from outside was fine but the mosquitoes were very bad.  There was some sort of mosquito zapper plug in thing but I don't think it helped much especially as we had the doors open which had no fly screens.  Both Will and I were up a lot of the evening due to the heat and the mozzies.  We're both prone to mozzie bites so it was fairly unpleasant.  But no worse than camping.  The bedding was comfortable but very hot.

Before bed we both had cold showers hoping to cool down.  The shower cubical was surprisingly good.  The water pressure wasn't the best but it was adequate and it was more spacious than I thought it would be.  The storage for shampoos and body wash etc is currently outside the cubicle but there is plenty of space in the cubical to install additional storage.

Whilst we are in the bathroom, the big question about the loo can be answered.  It's fine.  It's good even.  It's a cassette type and the flush is a foot pedal one and works quite well.  No concerns from me except from an environmental cost one.  Alex tells us he just ends up disposing of the waste down another loo.  Which makes sense.  But can't imagine doing that on a long term basis.  They are considering putting in a composting loo system.  I do like a 'flushing' loo so not sure how that would go although the concept is fine.  I wish they made more 'foot' pedal flush mechanisms for normal toilets.


The tiny sink in the bathroom is serviceable but the sink in the kitchen is just as easy to use when brushing teeth and is just outside.


There is an exhaust fan in the bathroom which is solar powered.  Which means it doesn't turn on when the sun doesn't shine.  We had to kick start it this morning to get it to start spinning.  I think an operable window would be much better and offer cross ventilation across the tiny house.  There is a good amount of light in the bathroom due to the poly carbonate panel that is exposed. 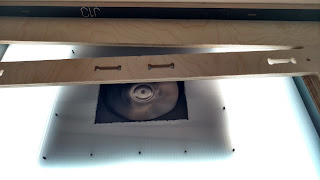 There is definite need for cross ventilation and more light in the design.  The great thing is that our feedback will help design the product.  This is prototyping at it's best.  Build a prototype, get people to actually live it in and get feedback.  This is a product manager's dream.

When we checked out on Sunday morning, Joanne interviewed us with specific questions and we also provided feedback about our thoughts about the experience and what could be improved.

The kitchen was functional although we didn't really use beyond making tea.  It had a small bar fridge, sink and gas cooktop and even a grill!  There is an electric element also that can be used if for some reason no gas was available.  Given the inverter only allowed up to 800 watts that one element would be the only thing that could be used electricity wise.  Needless to say we only used the gas.  The gas stove worked better than the one we had in Howes Valley.  It was LPG and very quick to take the spark and stayed on.  Also had no LPG fumes into the tiny home.

The space under the stove could be used for more efficient storage although all the essential items were on hooks or on the shelves.  There wasn't much more needed for basic cooking.  The one thing that is missing is an oven.  Or even the (inverter) capability to use something like a turbo oven.

All in all we had a good stay.  There were a few hiccups (like a door getting stuck and the mozzies) but overall it was a great weekend.  We to got to stay in a tiny house so I could get it out of my system.  The problem solving part of me wants to go and work out ways of making it cheaper, better, easier, but the practical part of me is just glad to be at home in air conditioned comfort.

Big World homes is looking for investment, support from local councils and land owners as well as other ways to help people get into a home of their own sooner.  If you want to support them get in touch with Alex and Joanne via bigworldhomes.com.