By Yvonne January 12, 2017
It's the little things that matter.  The ones that make all the difference.  One of my very good friends asked me what I wanted for my birthday.  At first I was thinking something practical.  In the end I requested some popsicle moulds.  But I was specific and wanted the Tovolo Robot Pop moulds. 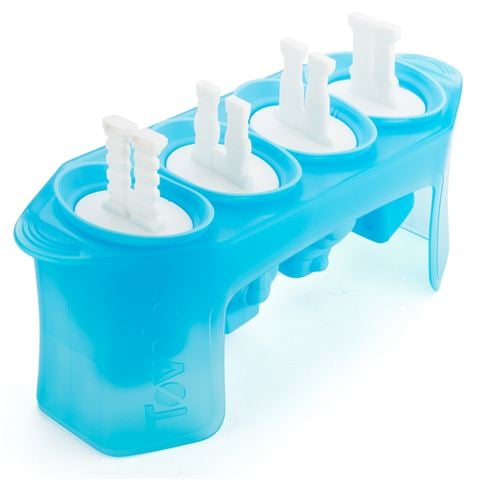 Each robot is different and were very cute.

But popsicles?  I never eat them.  So the question was posed why I wanted them.  I love ice cream but usually scoopable stuff rather than popsicles.  And never the icy frozen sugar water stuff.  But by making my own I could make sugar free popsicles including a peanut butter one.

The delivery came on Monday 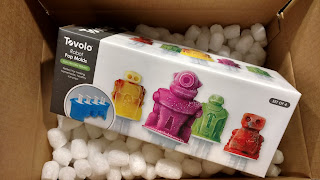 Yep you can start seeing why it was on my list of desirable items!

And of course I had a day at home yesterday and made up something.  I had some Coconut Cream Keffir, some frozen mango and a spoonful of rice malt syrup and whizzed it up.  I had no idea if it would work out but wasn't too concerned as I just wanted to try out the moulds.

Excuse the mess in the background but I was super excited when I unveiled the robots and just took the photos. 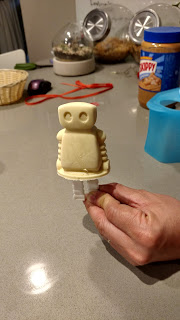 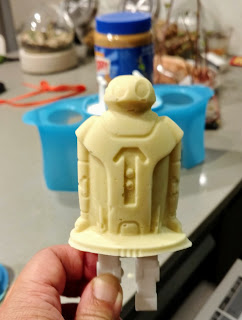 Super cute!!  and tasty too!  The robots were super creamy and tasted great!  Not sure as a scoopable ice cream it would work.

I may have become a convert.  These are now nicely portioned, easy to make and cute.  The only issue is that I can only make 4.  The 'legs' match each of the individual moulds and can't be replaced with something else.  I suppose I could put popsicle sticks in but they would slide out when demoulding.  The demoulding process is a bit of a peeling exercise and the the 'pop' in popsicle is apparent!

I've filled the two moulds we used yesterday with more of the same mix (except I added a banana to the mix in the meantime... the mix is in the fridge for easy filling... )

So Robot Pop Moulds are a winner!