I’ve subscribed to Sustainable World Radio as a podcast feed and came across an episode about building and building in cob.  So of course now I want to build one in Howes Valley.  I want to start small (more likely to be achievable!!) and will learn from building a “pizza” oven (earthern oven) first.  I’ve been using Spool to download a number of YouTube and Vimeo videos to see how others have been building them.

At this stage the pizza oven has to come first.  The base is the interesting component and I’m wondering if I should use the legs of a table I don’t like… and just build more stone around it and mortar it in with a cob/cement mix mortar.  And I want to expand on it by building some benches or sitting area for the BBQ/Pizza oven.  So I’m picturing a layout something like this:

The middle will be workable height (using my table legs possibly?  or some sort of block work to build a BBQ and Pizza oven area) and then on either side facing both the house and the view – this may change and maybe I will do two inward facing horse shoes instead like the below or some combination or one big conversation pit facing the pizza oven and view... The oven first!! But it’s good to have an idea of what to do next

The benches I’m thinking will be built using straw bales to form the bulk of it and then covered with cob and plastered.  So the seat will be one strawbale high and the ‘back rest’ another strawbale high.  Based on that I’m thinking each side bench would be 12 strawbales plus cob.

The conversation pits seem quite cool too.  We’ll have to see when we have the oven in place what feels better.  I’ll probably still build it out of strawbales and cob as it should be faster than cob alone.

Now I want to get some cob books from Amazon and it is Black Friday… oooh so tempting!  But I should also check out Booko.com.au to see where I can get the books cheaper…

And a couple of pics of cob ovens I like: 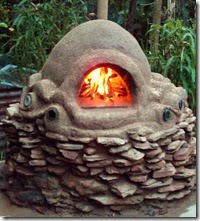