By Yvonne June 25, 2018
Somehow I stumbled on the Magic Mirror project and of course I wanted to build it.  Forget that I was in the middle of another mirror project (still not finished) but this one is now built!

Here is the finished product (still a bit messy as I put a small console type table under the mirror): 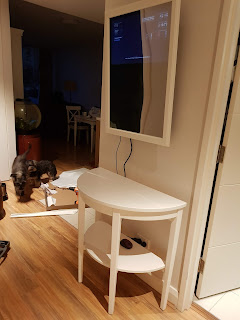 The console table was added... as I needed to hide the power point from my dogs who like munching on power cables if too accessible.  Before I mounted it on the wall I had it propped up on a dining room chair... 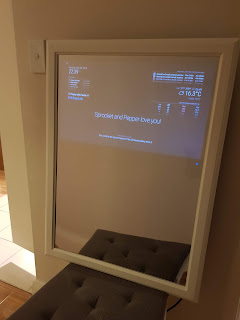 There are plenty of resources on how to get the magic mirror tech side of things done.  The key resource is the Magic Mirror site: https://magicmirror.builders/
I've also used Google a lot and Jayen helped me a lot too on various bits and pieces.

The main thing that is different is the way I put the frame/mirror component together.  Here are the high level details (oxymoron?):
1. bought mirror tint from Aliexpress https://www.aliexpress.com/item/50x100cm-Window-Film-One-Way-Mirror-Silver-Insulation-Glass-Window-Film-Solar-Reflective-Home-privacy-Decoration/32658438220.html less than $5
2. bought monitor from MSY (and ended up using that as my monitor and using my old monitor for the magic mirror.  Note I didn't strip it to just a screen but just mounted the IKEA picture frame onto the monitor with a combination of sticky tape! (special mirror sticky tape!) and screws.  Samsung monitor 21.5" was $127.50 (for the new one).
Don't get this monitor (Samsung 21.5" (LS22F355FHEX/XY) 1920x1080 5ms HDMI D-DUB VESA LED Backlight LCD monitor) for your project... you want one where the buttons and power outlet are not on the back...
3. bought a monitor wall mount from Target with an arm.  https://www.target.com.au/p/target-full-motion-tv-wall-mount-small-to-medium/59877820  I needed to do this as otherwise there isn't enough space in behind the monitor to put cables etc.  $29
4. bought a right angle cable for power - probably around $10
5. bought a right angle cable adapter for the HDMI cable - probably around $10
6. Raspberry pi (local supplier), case (Aliexpress), PIR sensor (Aliexpress), jumper cables (Aliexpress).  Btw if you want jumper cables I now have 17 spare.  (Needed 3 for the PIR sensor connection)
7. IKEA Viserum frame https://www.ikea.com/au/en/catalog/products/30268907/ - I got the 61 x 91 cm version

I think they are the main things I needed to build the physical mirror... I may have missed bits and pieces.

I also wanted to make it easy to remove/just have a normal mirror in that same spot if needed... (not as a back up plan in case I totally stuffed up of course!)

Mirror Tint application
So the key thing for me to build it initially was to cover the plastic / glass from the frame (plastic in this case!) with the tint.  This was mirror tint so it would look like a mirror on one side and could have light show through to the other side.  My tip to those who haven't tinted before is to not crinkle the tint and to use an old credit card to smooth things over.  I didn't have any special formula so just used detergent and water mixed into a spray bottle.  I didn't use distilled water.  My first few attempts looked awful.  But that's because I was using a shower squegee.  Don't do it.  Use the hard edge of a credit card.  Ideally get someone to help you so that the tint goes on in one go. 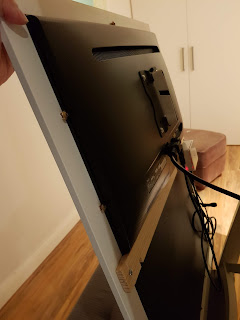 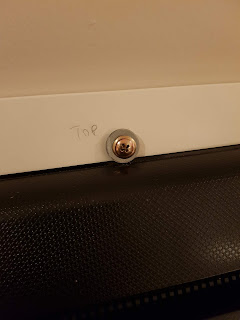 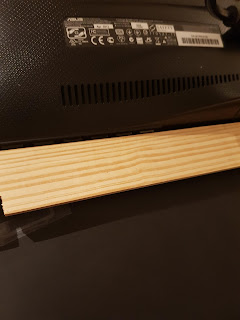 I've also just 'stuck' the Pi case using the 3M hooks for picture frames.  This makes it almost like velcro but not quite.  This worked better than expected! 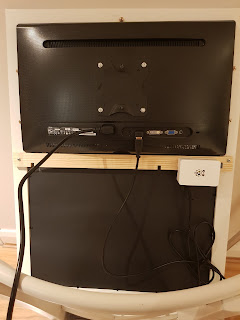 You will see the monitor mount (VESA) on the back of my monitor and the 'right angle' cable and adapters I used.

I cheated.  I used the wall anchors for plasterboard.  As I couldn't find the battens in the wall.  (Yep add your eyerolls here!!) 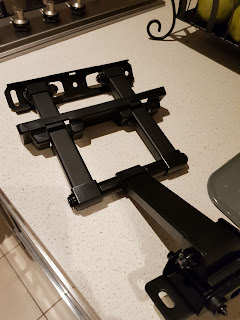 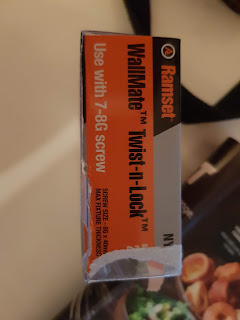 This is a side on view of the mirror -> wall.  As you can see there is a significant amount of space between the wall and the frame.  That's because I wanted to keep the monitor as whole as possible. 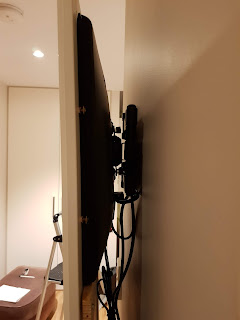 I was very excited when I could finally mount it on the wall!  The project didn't take long.  Could definitely do it as a one day (a few hours?) project.  As long as you have all the bits.  The tint took ages to get to me only because the post office didn't notify me of it and was sitting there for weeks. 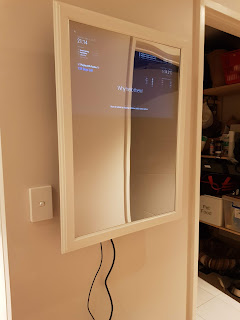 So magic mirror... with newly installed PIR which is not placed optimally... who is the fairest of them all?  (most likely Pepper... or Sprocket!)