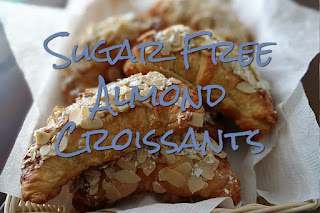 Recently I've been really seeking out Almond Croissants.  It started with an almond croissant at Sonoma Cafe in Alexandria.  They had one in the glass cabinet and it was calling my name.  I don't think I have had one prior to that for years.  It was ah-mahzing!  Flakey, a bit gooey and with lots of almond flake goodness.

Since then I've sought it out and had a mix of good and bad ones.  But then I had a thought to make it myself.  And so the internet uncovered a number of great looking recipes but I landed on one called Almond Croissants Recipe (French Bakery Style).  It was on Natasha's Kitchen's website (link to the actual recipe here http://natashaskitchen.com/2013/11/01/almond-croissants-french-bakery-style/).  It's not a site I had frequented.  I don't tend to follow food bloggers but do recognise when I've been to a site after a few times.

Whenever I follow a recipe I never follow it to a tee.  I tend to modify it and cook very much what I consider "asian" style.  In that I'm a bit loose with measuring things.  With this recipe I modified it by substituting the sugar.  In fact the only 'added' sugar I had to this recipe was the icing sugar I used to dust the croissants with.  I don't think it would have been detrimental to leave it out altogether.

I have since managed to make a few batches of almond croissants with very little sugar involved.
Don't these look amazing? 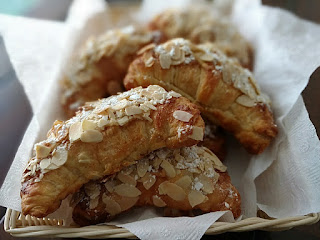 I have a fear of sugar having helped out at I Quit Sugar and watching a number of YouTube videos about the evils of sugar.  It's unfortunate that the other part of me says that I shouldn't deprive myself and end up having another snack or bit of chocolate!

In any case I do try and reduce sugar where I can from cooking and baking.  And my taste buds tend to like to be more bland than the mainstream.  I tend to like things less salty and less sweet.  So these were fantastic for me but I suspect were a bit on the bland side for most other people.  If you are making these of course you can adjust the amount of sweetness to add in.

To get the croissants I used the following substitutes:

For the syrup
Instead of rum I used Macadamia Royal Liqueur.  Just because that's what I had.  (Note this is quite sweet)
Instead of sugar in the syrup and having to heat it I just used a half a dropper of Vanilla Creme Stevia. 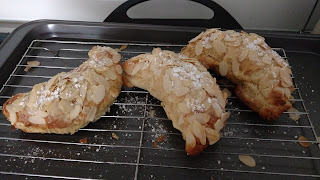 For the almond paste, I just replaced the granulated sugar they wanted with Xylitol (I have at home Xyla) which is a sugar substitute that bakes like sugar and is safe for diabetics. 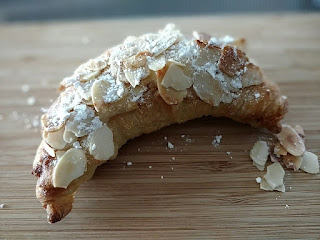 Pretty much the rest of it I followed the instructions for (don't worry I'll pop the whole recipe with my substitutes and my method below.  The first batch was only 3 croissants so I easily did 1/2 the recipe and popped it in the Turbo oven for 18 minutes.  The next batch was still easy and I prepared them overnight and baked them first thing in the morning (made the house smell amazing!).  Details on exactly my method below. 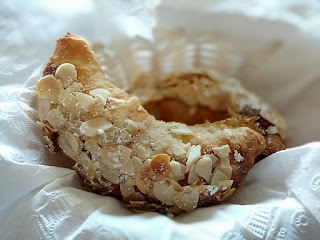 You can also keep the paste for later so you can even make them 2 at a time or 1 at a time if you aren't sharing!


Step 2. Cut open croissant as if you were making a sandwich out of them.
Step 3. Make the syrup


Step 4. Line a cookie sheet with baking paper
Step 5. Construct
That's it.  Other than baking.  So I left mine overnight after construction but there is no drama to pop them in the oven at this point.

Step 6. Bake
I found they were crispier when left to cool rather than eating them warm.