Old folks on iPads (and other devices)

By Yvonne July 03, 2016
I'm writing this post after an interesting problem which I'm sure many of us have.  Trying to connect people digitally when they don't understand digital.

With the proliferation of devices and the 'consumerisation' of tech it's easy now to give someone an iPad or iPod touch or even an Android tablet as a gift.  But then there is the whole support of it.  And the set up of Wifi and explaining how much things cost and how it works.  And it made me think if there was a network for this or some sort of service.  Would people pay for such?

Makes me think I should probably write this up better and post it on Medium rather than on my lonely old blog which is really just a dumping ground for my thinking.... ok later I'll do it later!

But it doesn't matter so much as to the money but how to solve the problem.

The backstory is that we gave my Chinese mother-in-law (MIL) an iPad as a gift last year.  It's been great.  Her daughter who lives in Melbourne can Facetime her and she's been having a grand old time watching YouTube videos.  We've installed a few apps and she knows to check her emails on the phone where she gets a bunch of photos on a regular basis.  Unfortunately her kids do not write Chinese and she doesn't write or speak much English.

My MIL is one of 8 (I think!) children, who happen to be scattered through the world.  Most are in Sydney but she has a sister in Hong Kong, a sister in Hawaii and a sister in Canada.  And these sisters are pretty much all older than her.  She currently contacts them via a calling card and phone calls.  But she is clever enough to have asked (after a lot of us prompting) if they have an 'iPad'.  And yes!  They do.  But how do they convey an email address to each other?  All they have are phone numbers.  We've given my MIL a gmail address, but we found out yesterday she didn't know how to explain the @ symbol.  We told her to say "at".  That's all good an well but how does the other side know what that means.  We're lucky if they know their ABCs.

We were at my Brother in Law's place for dinner last night and my MIL pulled out her iPad and a piece of paper on it with a Hawaiian phone number.  Not an email address (which is what we'd expect as an Apple ID).  Hmm so we tried using that to look up the Apple ID via Facetime.  She was told that the party in Hawaii (which got entered into the iPad by 'us' as "Hawaii's Aunt's Daughter".  We tried sending a message but the iPad was smart enough to know that there is no number associated with that Apple ID.

So I pulled out my phone and my WeChat account.  I only have WeChat installed due to my Mum who will occasionally message me there but most of the time she sends me WhatsApp messages as she also has that installed.  My mother also has an iPad but her English is good and she happens to be more ahead on the technology curve. 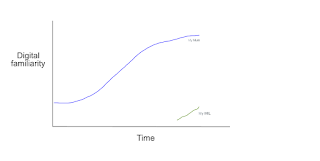 I entered the number and bam!  I got a result.  I showed my MIL she nodded to the Chinese characters (which she had to squint at as she didn't have her glasses with her) and the photo avatar I had on the phone.

I told my MIL to wave at my phone and took a photo on my phone to send to the lady I found on WeChat.  I then entered in Chinese details of my MIL's Apple ID.  It was the middle of the night in Hawaii so we left it at that.  This morning I woke up to a barrage of messages and photos on my WeChat account.  Mostly messages left as voice messages.  Because in WeChat (and WhatsApp for that matter) you can do that.

So now we are working out how we activate a SIM card that we already have on a feature phone (as that's the only phone with a 'full' sized SIM card to get the text that we'll need to set up a WeChat account.  Thank goodness WeChat has an iOS iPad version.  I hope it works!  We'll be heading to my MIL's place to set it up for her later today.

We were musing that we need to provide old people a way where they can get a pre-printed leaflet with screenshots on exactly what to do so we can write on it the AppleID so they can post it to their counterparts so get connected.

The sad thing is we don't even use our iPads.  There is barely a use case between our laptops and our phones.  We are more Android users in any case so struggle sometimes to support our parents on iPads and iPhones but even we know trying to explain to them how to use an Android would be the death of us.

So unite with me.  I should set up a support group for people who are on the early stages of the digital familiarity curve.  It's accessibility at a fundamental level.  And universal design.  And change management.