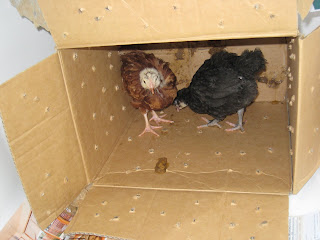 We bought a couple of chickens last weekend from the Chicks r Us farm (Barter and Sons Hatchery).  We bought from them as I was very keen on getting an Australorp (black coloured chicken) rather than the normal Isa Brown.
We ended up getting one Australorp (now named Betty) and one Rhode Island Red (now named Wilma).
Day one was freezing so we kept the 5 old chicks in our bathtub.
Pics from Day one are on the right. 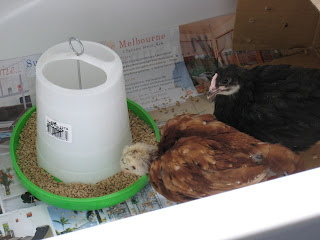 We brought the home in a box which was originally for Compost Worms.  The 'cheeped' all the way home!
In addition to the two chooks, we purchased a chicken feeder and some chicken feed.  Due to the young age of the chickens (we wanted Point of Lay but chickens are in high demand, so the oldest we could get was 5 weeks), we purchased $10 worth of chick feed and a bag of normal chicken feed.  Total cost of chickens, chicken feed holder and chicken feed and credit card fees: $68.11.
There of course was lots of preparation work before the chickens could be 'installed'.  Will built a chicken pen / coop as well as modified a dog house (we just bought a dog house and modified it) to give the chickens a safe environment in which to roam.  We may allow them to free range after they have cleared up the pen area a bit more (and work out how to catch them and then clip their wings!)
Chicken Pen: 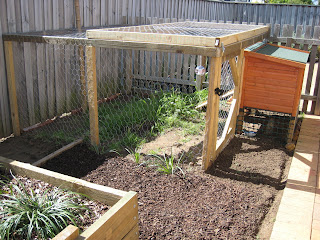