By Yvonne January 06, 2009
Yep... finally, after much anticipation we have finally got our first egg. It arrived sometime on Monday 5th January 2009. It's fairly small and a relatively white egg. Here's a photo of the first egg: 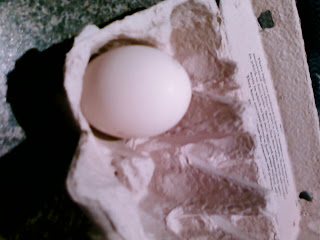 I *think* it came from Wilma, mainly as she was exhibiting some very strange behaviour on Sunday where she dug a hole and then dustbathed in it. Whilst that wasn't that strange... it was the way in which she did it. Also as I am expecting Betty (Australorp) to lay a darker coloured egg... but that could just be my misconceptions.
And here I was waiting for the crouching behaviour etc and watching for red combs etc.